These are the foundation Angus and Red Angus cow families of the G P herd. For over five decades and through many generations, we have selected for great dispositions, non- forgiving fertility and mothering ability along with the most elite curve bending genetics we could find each breeding season. Our herd has become what it has been selected to be. Generations of easy fleshing, voluminous matrons with the ability to produce breed leaders in most all traits. These are the mothers to numerous test station leaders, herd bull prospects and foundation females for many herds in the upper Midwest. We have visited many of the top herds in the country, and we come home even more proud of what many visitors claim as one of the most elite performance Angus herds in the upper Midwest. Learn more about each family: 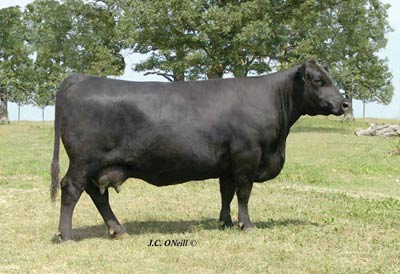 The founding member of the Blackbird tribe is Ankony B999 Lass 28073 (437N). She was purchased in 1981 as our pick of the Corbin influenced Emulous bred females at Ankony Shadow Isle Ranch of Minatare, Nebraska. Her grandam is Blackbird of Coalgate 21, the dam of Gaines Lady. Gaines Lady was arguably the most influential female from the Murray Corbin herd of Connerville, Oklahoma. This cow family has been extremely productive, fertile and long lasting. The highlights of our Blackbirds are: 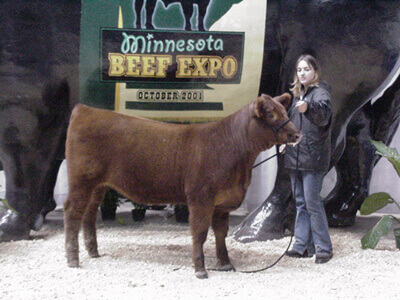 The initial member of this cow family is LSF Faith LA416. LA416 was purchased in 2001 from Ludvigson Stock Farm of Cushing, Iowa. We feel that LA416 was the best Marias daughter to sell in 2001. This cow family has been extremely prolific, producing many great herd bulls. The Faiths are some of the top matrons in the breed. Some of our most impressive Faiths are:

The founding member of the Katinka tribe is Ankony B999 Lass 35824 (824R). 824R was purchased in the fall of 1974 from Ankony Angus Corporation of Bloomfield, Iowa. As a senior in high school, my best friend and future wife, Claudine, and I ventured to Bloomfield to add some Dynamo daughters to our Angus herd. As young seventeen-year-olds, we were overwhelmed when we found ourselves selecting through over 400 heifers. The Katinka family is one of our originals and has stood the test of time. Despite selection and hard culling over the last four decades, the Katinkas are still some of the most prominent females in our herd. Short gestation with superior growth and maternal traits best describe the Katinka females. These are some of our most prominent Katinkas:

The founding member of the Lexy family is Lexy 1199 S D G. 1199 was purchased in 1999 from Steven Goodfellow of Bruce, South Dakota. We were looking to add a new cow family with breed-leading growth and style, and 1199 was what we thought to be one of the top heifers to sell in the fall of 1999. The Lexys are just that â€” tremendous growth and extremely eye appealing. Some of our best performing Lexys are:

The founding member of the Missy family is HF Strategy Max 502. She was purchased in the spring of 2007 along with the entire herd from long time friends Paul & Peggy Hanson from Welch, MN. The Missy family are moderate framed, well balanced, and extremely productive. Our best Missys: 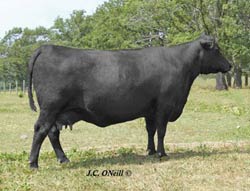 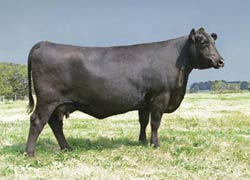 The founding member of the Pride family is Ankony B999 Lass E9054 (175). 175 was purchased in the fall of 1974 from Ankony Angus Corporation of Bloomfield, Iowa. As a senior in high school, Claudine and I ventured to Bloomfield to add some Dynamo daughters to our Angus herd. The Prides are the basis of our herd. They have been selected for moderate birth weight, breed-leading growth and elite carcass for generations. They have become exactly what they have been selected for. The Prides of the Goodrich Place are: 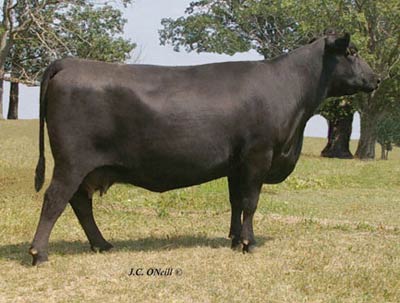 The founding member of the Princess family is Ankony Miss Emulous 510H9 (Y700). In the fall of 1989, we ran a computer search to find the top WW and YW EPD non-parent females in the breed. Y700 was in the top ten in both areas. We purchased Y700 from Ankony Shadow Isle Ranch of Minatare, Nebraska, after spending almost three hours searching the lots for Y700, not wanting the staff at Ankony to know what we were looking for. Y700 descends from Miss Emulous 243 who we owned before selling her at 19 years of age to Vintage Angus of California. Miss Emulous 243 is the dam of Emulation 31. These females have produced many of our high-indexing bulls each year. The best of the Princess family are:

The beginning member of the Redbird family is D Touch of Class which we purchased from Dennis Dommer of Iowa. The Redbirds are very fertile, productive, hard working cows which wean some of our highest percent weaning weight to mature cow weight in our herd. The best of our Redbirds:

The founding member of the Deb family is Bieber Deb 4358. She was purchased in 1998 with a large group of cows that originated from Bieber Red Angus of Leola, South Dakota. The Bieber purchase has proven to be very profitable and has added some unique and powerful genetics to our herd. The Debs are easy keeping, high marbling and extremely productive. A sampling of our Debs: